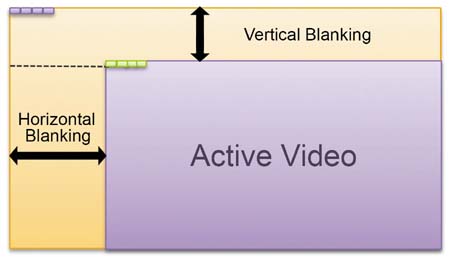 The period of time for horizontal blanking is approximately 16 percent of each H line. The total time for H is 63.5µs, including trace and re-trace. The blanking time for each line then is 63.5 x 0.16 = 10.2 /is. This H blanking time means that the retrace from right to left must be completed within 10.2 As, before the start of visible picture information during the scan from right to left.

The time for vertical blanking is approximately 8 percent of each V field. The total time for V is 1/6„ s, including the downward trace and upward retrace. The blanking time for each field, then, is ‘/6„ x 0.08 = 0.0013 s. This V blanking time means that, within 0.0013 s, the vertical retrace must be completed from bottom to top of the picture. The retraces occur during blanking time because of synchronization of the scanning. The synchronizing pulses coincide with the start of the retraces. Each horizontal synchronizing pulse is inserted in the video signal within the time of the horizontal blanking pulse. In summary, a blanking pulse comes first to put the video signal at black level; then a synchronizing signal occurs to start the retrace in scanning. This sequence applies to blanking horizontal and vertical retraces.

3.58-MHz Color Signal
The system for color television is the same as for monochrome, but in addition the color information in the scene is used. This is accomplished by considering the picture information in terms of red, green, and blue. When the image is scanned at the camera tube, separate video signals are produced for the red, green, and blue picture information. Optical color filters separate the colors for the camera. For broadcasting in the standard 6-MHz television channel, how-ever, the red, green, and blue color video signals are combined to form two equivalent signals, one for brightness and the other for color. Specifically, the two transmitted signals are as follows:

1. Luminance Signal
Contains only bright-ness variations of. the picture information, including fine details, as in a monochrome signal. The luminance signal is used to reproduce the picture in black and white. This signal is generally labeled Y signal (not for yellow).

2. Chrominance Signal
Contains the color information. This signal is transmitted as the modulation on a sub carrier at 3.58 MHz for all stations. Therefore 3.58 MHz is the frequency for color. This is generally labeled C signal for chrominance, chroma, or color.